The fulfillment diaries- An English Fall 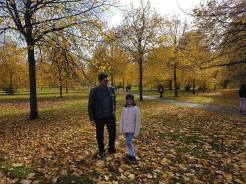 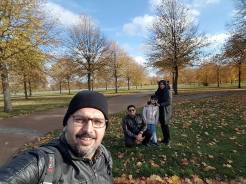 The Kensington gardens is according to me, the perfect microcosm of English life. Incessant rain, Maple leaf lookalikes floating around, super courteous old couples with their well-behaved dogs and the occasional strains of Scottish bagpipes. Bliss! The colors that welcomed us were breathtaking. The cold breeze accentuated the feel. Interacted with the Queen’s swans. Could reflect over the urgency of time by watching Amaan and Jehan in the same setting- space unchanged, a decade apart.

2 Learning points for myself

At the Westminster Abbey, Poets and Scientists slept alongside England’s greatest Monarchs. Speaks volumes about the values the Brits want to pass on to the coming generations. Charles Darwin who challenged Creationism lay next to Newton close to the Sanctum Santorum. What Darwin’s soul would have felt, I wonder. 🙂 🙂 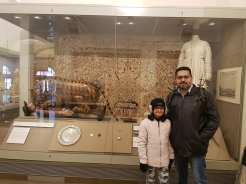 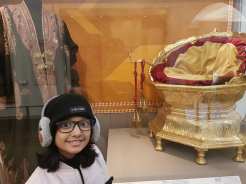 At the magnificent Victoria-Albert Museum, two of India’s most valiant kings were presented in all pomp and splendor. The Tiger of Mysore and the Lion of Punjab. Though they were thorns in England’s flesh, they were being celebrated. The Nisams and Marathas who were loyal allies were conspicuous by their absence. A key learning point about short term success and long term glory.

As all good things, the holiday came to an abrupt end. So we moved from 14 degrees to 32 degrees. “Don’t be sad,” I told the kids. “Pleasure means nothing without Purpose.” They nodded in agreement.