Smiling with a Tear Stained Face

Millions of people from every race and creed are fasting today. They have given up food and water since dawn and are spending their time praying to almighty god… to commemorate an event that happened thousands of years ago.

The almighty god sends a messenger to a community downtrodden for centuries by a tyrant ruler. The prophet rallies the beleaguered lot under the banner of faith, truth and justice and they stand up to face the overwhelming might of the tyrant. With the help of divine interventions, the prophet and his band of erstwhile slaves win the battle against evil. God almighty preserved the body of the cruel tyrant- Ramses II, as he promised in the last testament, the holy Quran. The 3000 year old body of the Pharoah was found by the Red Sea, and is now on display in the Royal Mummy Chamber of the Egyptian Museum in Cairo.

We fast on this day to thank god almighty for blessing prophet Moses (may God be pleased with him) and his disciples with victory over darkness. And as we fast, the world reminds itself that good will ultimately triumph over evil. Truth over Untruth. Light over darkness. And aggression, brute strength and injustice will meet its sorry end one day.

This thought brings a smile to my tear laden face.

The source of the pain also has to be explained. Many years after Moses (may god bless him) came another prophet whose mission was to complete God’s message for his creations. He continued the propagation started by Adam, Noah, David, Joseph, Solomon, Moses, Jesus and many other respected messengers of god. The holy Quran revealed to him is guiding millions of people towards the straight path of success. An arduous but enlightening path that demands untold sacrifices and total submission from its wayfarers. After the death of prophet Muhammed (May peace and blessings of god be upon him), the leadership of the community was passed on from one ardent believer to another, rightly guided followers of the prophet. But at one unfortunate instant of history , this smooth flow was suddenly interrupted….

Leadership of this nation was passed on to a son from his father. This unprecedented succession was not endorsed by all the respected members of the community. Scores of subjects rose in unison against this appointment. The dissidents flocked to the prophets grandson -Hussain (May god be pleased with him) who was revered as an epitome of religious virtue and enlightenment. Hussain took up the mantle on behalf of the believers and raised his objection to the hegemony of the newly appointed ruler.

On the 10th of Muharram, at the plains of Karbala, the army of the ruler accosted the band of believers comprising of Hussain, his family and his supporters. Hussain found to his shock and dismay that most of the people who had invited him and pledged support to him had changed their stands and deserted him. Though Hussain refused to shed blood, he was forced into battle and was martyred along with his family members and followers.

My heart aches and my eyes reverently bleed. Different chapters of history with different climaxes. The avid reader in me is finding it hard to summarize. Is the timeline of history behind me a tragedy for those who stood for truth? What will it be in the years ahead of me?

The confusion notwithstanding, I am sure of one thing. Though individual paragraphs don’t make sense at times, all these characters will emerge once again in the pages of the big book of eternity . The supreme author, that embodiment of justice and fairness would rewrite the plots in a way that all wrongs would be corrected with just one stroke of his pen. And the last lines will tell us that the good ones lived happily ever after and the bad ones otherwise. Then truth shall have its much awaited last laugh.

Though I may have to cover many miles and endure long hours of sleep before I can get my hands on this book………I am happy because it has a happy ending. So let me wipe away the tears and repeat the lines from a famous hindi film-“The movie has not quite ended, my friend” 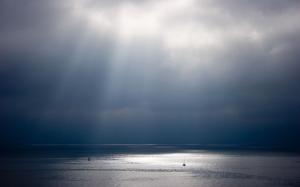 One response to “Smiling with a Tear Stained Face”