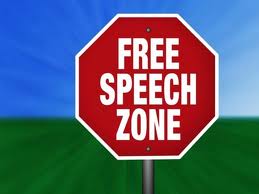 After decades of promoting and indulging in Free sex, they have now shifted to endorsing Free Speech. While the popularity of the former was arrested by a certain incurable virus, the latter is growing unhindered across blogs, tweets and discussion fora. What could have triggered this ado? Do a Google search and you can instantly locate the partisans on either side of the battle lines. Fierce looking Muslim youth holding placards reading “Death to those who defame Islam” on the far right (literally) , and liberal, cool, inspired, educated ,intellectuals on the other- The proverbial clash of the civilizations . The community has once again worked itself into a nasty corner. Changing their online status from “Victims” to “Aggressors” overnight- due to their reactive, crude style of activism. Flag burning is permitted in America, because it is a free country, they say. But the flag burners invariably end up, spied and stalked forever or even in orange overalls behind barbed wire enjoying generous doses of water boarding. And even in the strongest bastions of freedom, holocaust denial is taboo. In the recently held UN World Conference Against Racism- Canada, Italy, America and the best of the west announced they would boycott the session if Israel is criticized. A spokesman for Franco Frattini, Italy’s foreign minister, said that a proposed passage, which relates to the situation in the Palestinian territories, contains “unacceptable, aggressive and anti-Semitic phrases”. The champions of free speech went on to drop that passage unanimously. But as long as it is not on the streets and not as outrageous as the placards, America is a free country and its these radicals who are against free speech.

Most write ups for Free speech reveal the Villain in the first paragraph itself. And the heroes are always the ones who provoked the antagonists in the first place. Though I cannot speak on behalf of the whole community, I can confidently say that believing Muslims have never been against “Free Speech”. It is perfectly fine to disagree, discover, debate, decide and then strive to make a difference. But it is just not ok to use one’s uninformed assumptions and prejudices to abuse, hurt and attack the dignity of others. It is said that over 60,000 books were written against Islam in the last century. Go to Amazon and search for “Islam” and see the number of books for and against it. In my last count, I found 4 books FOR and 18 AGAINST. No problem mate. But when someone doles out “classics” calling the prophet a dog and his wives prostitutes, any self respecting community will definitely have a problem with that. For that is Hate speech disguised as Free speech.

Mahatma Gandhi, Prophet Muhammed and Joseph (The husband of Mary) married women aged below 13 years. All three girls had attained puberty and had agreed for the nuptial union. But if you are uncomfortable about the age, please take some effort before shooting off. Read books from sources close to them, ask the scholars and try to understand the context behind the event. If you still feel uncomfortable, go ahead and express it by all means. But make sure that what you say is True, Kind and above all is intended to reform and not to insult and provoke. This is hugely different from degrading them as “lusty pedophiles”. I can express my reservations against girls wearing miniskirts, but if I call them sluts, then I am asking for trouble. The fact that technology makes it easier to make our voices heard (even my blog has over 3500 followers) makes it incumbent upon us to be even more responsible and careful. In a recent poll that I conducted online, I had posed the question “What hurts longer and more- an insulting verbal attack in public or a slap?”. The results are given below and are self explanatory. 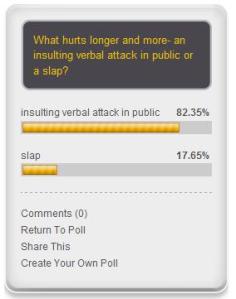 Let us go by what the Messenger of Allah صلى الله عليه وسلم said: “Whosoever believes in Allah and the Last Day, then let him speak good (khair) or remain silent.” Disagree by all means, but be true and kind with the intention to reform.

Going by this- forced detentions, banning the niqab & the building of minarets and burning the quran are the best examples of efforts against “Free Speech”, not the angry youth with the placards.